skip to main | skip to sidebar

Here are some pictures from a few things we have been doing lately! About a week ago, Blake went on a snow goose hunt and had a great time! They shot quite a few birds and even shot a 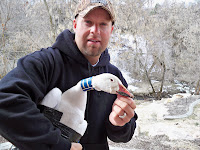 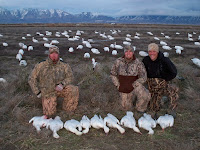 that one is going to the taxidermist!

Then, last week, Blake, Curt, and I went down to the Sportsman's Expo and you could hold a baby bear and have your picture taken with it (for $10)! Blake and Curt didn't want to pay the money, but I convinced them it was worth it :) We had our picture taken with one of the 2 month old cubs and then we could pet the other one for as long as we wanted. All three of us wanted to bring him home to play with! His paws were so fun to play with and when Blake started scratching his belly, the bear stretched out on his back and just enjoyed it! It was a blast! 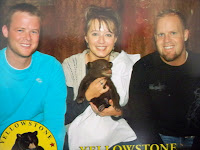 Morgan, that bear is so darling! How fun.

Morgan
Since many of our family and friends have created blogs, we decided to create one as well. We are excited to be able to keep up on everyone's lives through the blogs! For those of you who don't know us very well, Blake works with his family selling insurance and Morgan works for her dad as a Vice President in his company. We have one chocolate lab named Cooter; He is like our child! Blake loves to hunt and fish with friends and we love to go to Jackson Hole and spend time at Morgan's parents house!

He is our child for now!